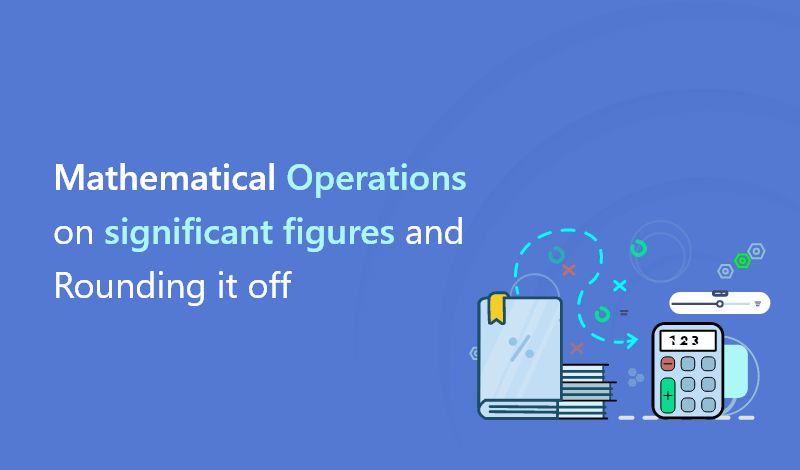 Mathematical Operations on Significant Figures and Rounding it off

Before starting this topic it is important to revise what are significant figures. These are the digits of a number that play an important role in its accuracy determination.

There are two known uses of significant figures. The first, as mentioned before, is that you generally identify how many values in a number are reliable. You can learn more about it through the sig fig calculator.

The second use is more specified. Significant figures are actually used after a mathematical calculation. Their importance can be explained well through an example.

Consider that you have a meter scale and measure the length and width of a tile as 3.01m and 4.25m respectively. You multiply it to find its area i.e 12.7925.

What does the result tell you? That the tile is exactly 12.7925 m2. But if you remember, your scale wasn’t even capable of taking this precise measurement.

This means the result is misleading. You need to count significant figures and round off to a value suitable according to the initial data.

To know How many significant figures are necessary and how to round off? Stay tuned. Since we need a lot of rounding off later, we will learn “How to round off?” first.

How to round off?

The process of rounding off involves shortening the number. Sometimes it is done to make it easy and sometimes to get the number up to the required length.

Usually, you round off to some number of the significant figures e.g round off 45 to one sig fig.

To have one sig fig we need to make all digits except 2, insignificant. This can be done by making all the other values zero as trailing zeros are insignificant.

Since the figure after the first sig fig is, 4, a digit less than 5. It means you will simply have to convert all the digits to 0.

Round off 0.009119 to three places. After that tell how many significant figures are there.

Since it is a decimal number rounding off to three places means the nearest thousandth (0.001). This means you have to round off all the values after the first 9.

As the digit after 9 is 1, a number less than 5, it will be dropped with all of the remaining digits.

One rule that applies to each and every situation is that you have to identify sig figs at the end of the solution. If you do it before that, like after every step, you will be losing necessary data.

If the solution contains addition and subtraction only then you will simply solve them. Now, comes the part of how many significant figures?

Consider you measured the height of a desk to be 1.5 feet. A friend of yours has a more precise scale and measured another desk to be 2.15 feet. You add the two values to know the combined height of the desks.

It is 3.65 feet. What this result implies is that the desks are exactly 3.65 feet tall combined, to the hundredth place. But you were able to measure the first desk only up to two significant figures.

This can cause a lot of problems so you basically take the least precise value and round off your result so that the units are similar.

In the example, the least precise value is 1.5 because it is precise to the tenth(0.1) place as compared to the other value which is precise to the hundredth(0.01). So we round our number to tenth place i.e 3.7 ft.

The least precision is up to two decimal places, a hundredth.

Step 3: Round off the result to the least precision.

The number at the third decimal place is 9 which means you will have to add 1 to the previous digit, 8.

Similarly, you can round off whole numbers. If you add two measurements, say 3400 and 231, the answer is 3631. But the first value has its last sig fig at the hundred’s place.

This means you will have to round off your result in such a way that its last sig fig is placed at the hundred’s place. That is 3600.

And that would imply that your scale is capable of measuring exactly ‘300.’ but actually the last two digits are ambiguous and insignificant.

It is comparatively easier. Just see what is the least number of significant digits and round your value off to that place.

In addition and subtraction, you are more concerned with precision but in multiplication and division, you take significant figures into account.

Mathematical Operations on Significant Figures and...

Standardformcalculator.com is a free and quick calculator for educators and students for converting number into a standard form using 4 different methods.
INFORMATION Privacy Policy
Terms of Services